Who Ordered The Rain? 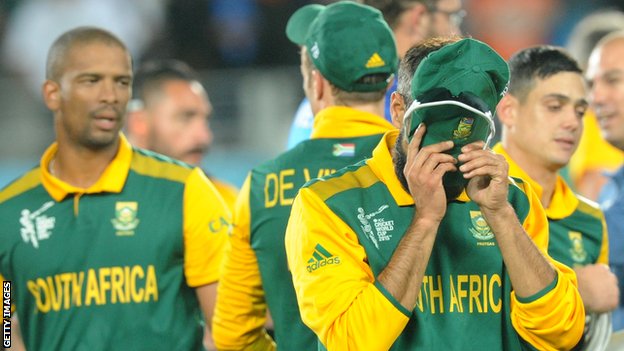 “We choked … a dark mist hangs over our cricket …”

The author’s note of my novel, The CURSE and the CUP, begins with the above quote from a press interview by Gary Kirsten, the coach of the South African cricket team at the time, after their dramatic defeat in the 2013 Champions Trophy cricket tournament.

Today, March 24, 2015, South Africa lost yet another knock out match in pursuit of cricket’s biggest prize, the ICC World Cup. New Zealand, the team that knocked them out of the 2011 World Cup defeated them again. But today’s defeat in Auckland was not a repeat of the defeat four years ago in Mirpur, Bangladesh.

Today, South Africa didn’t choke. The Proteas played gutsy cricket till the very end. At several times during the match they performed better than the Kiwis with bat and ball, and in the field. And at several stages of the match—after they finished batting, toward the end of the match with three overs to go—it appeared as if they would actually pip the Kiwis to the tape.

But they lost. And the dark mist Gary Kirsten alluded to in 2013 continues to hang over South African cricket. Understandable then why the rainbow nation and millions of passionate cricket fans around the world would like to know why the Proteas lost.

Based on early reporting from Auckland, it appears that blame diggers have wasted little time in shoveling familiar dirt.

It’s early hours. The team and South Africa are still numb with the shock of defeat. However as the numbness wears off, and the heartbreak of defeat hardens, and the loss begins to sting, the shovellers will dig deeper and discover—in some cases even invent—more blame to hurl. And while the dreaded “C” word—chokers—has yet to rear its ugly head, it won’t be surprising to see it do its obligatory rounds as well.

But as I wrote in the opening pages of The CURSE and the CUP, what-if South Africa’s inability to win the ICC World Cup has nothing to do with cricket? What-if team selection and sloppy fielding has nothing to do with their defeat? Nothing. What-if the dark mist hanging over South African cricket is unpaid karmic debt; a debt to those who were denied their rightful place on cricket’s biggest stages during the apartheid era because of the color of their skin? What-if a generational curse is preventing the Proteas from winning cricket’s most prestigious trophy? What-if the curse and what it symbolizes is still unvanquished?

The CURSE and the CUP is fiction, and like all works of fiction is an invention fueled by imagination; yet extremely plausible. In that spirit of plausibility, I offer a few questions to ponder to those inclined to favor paranormal explanations over temporal explanations.

· It was rain that robbed South Africa of a certain victory in the 1992 edition of the World Cup; their first global tournament after readmission to international cricket. Just bad luck, as the pundits of that era had us believe? Or did an invisible force…a curse…order the rain?
· Who ordered the rain today? Yes, it was rain again that slowed South Africa when they seemed certain to post a match winning total around 350. A mere coincidence? Or did the curse, intent on exacting revenge and crippling dreams even till today, order the rain again?
· We could dismiss as mere coincidence that the same obstacle—rain—should have played a role in determining the outcome of the match in the same part of the world; the 2015 World Cup is being jointly hosted by Australia and New Zealand, as was the 1992 World Cup. Or, we could admit a separate reality and hear the silent sinisterness of the curse?
· Finally, again a mere coincidence that the same team—the Kiwis—that broke their hearts in 2011 should have broken their hearts today, or is it the curse’s way of saying, “I haven’t gone away yet.”

Incidents that appear as mere coincidences at first blush can often be a trove of alternate explanations, which is why novels grip us. The CURSE and the CUP is a novel that weaves a story around incidents that appear freakish, but could in fact be the workings of a curse doing its bidding. In the novel, Mama Nonkosi places the curse on the Proteas. After today’s match, the novel continues to ask if Mama Nonkosi’s curse is still alive, especially if we ask ourselves the question, “Who ordered the rain?”